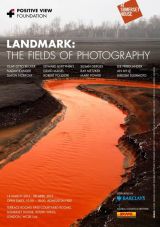 
"Of all the different practices of photography today - fashion, portraiture, photojournalism and so on - none is richer or more varied than landscape.
Landscape photographers have a multitude of interest and agendas: some are in the employ of corporation or news agencies; others have worked in the fields of science and exploration; and some follow a personal agenda. Landscape photographers have exposed the wounds and scars of the world or shown regions that have so far escaped the heavy hand of man. Some are content with the pastoral and picturesque; others share nightmarish visions of a degraded and violated earth."

This exhibition was one part of a two part comparison I made ,on a day trip to London , of different landscape styles. The other exhibition was work by Ansel Adams at the National Maritime Museum at Greenwich. While Adams' work was originally a rebellion against the existing Pictorialists, together with the likes of Steichen and Steiglitz, I now feel that his interpretation of the landscape is entirely picturesque. His Modernism group has perhaps been now overtaken by many of those shown at Somerset House or is he just another to add to the milieu?